Emily Leitch of Brooklyn, with her son, Nazir, 4, was arrested for importing cocaine but went to “drug court” to avoid prison.

Federal judges around the country are teaming up with prosecutors to create special treatment programs for drug-addicted defendants who would otherwise face significant prison time, an effort intended to sidestep drug laws widely seen as inflexible and overly punitive. 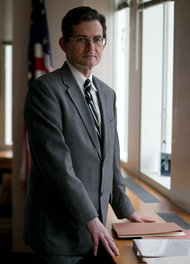 John Gleeson, a federal judge in Brooklyn, helped establish a “drug court” as an alternative to some long prison sentences.

The Justice Department has tentatively embraced the new approach, allowing United States attorneys to reduce or even dismiss charges in some drug cases.

The effort follows decades of success for “drug courts” at the state level, which legal experts have long cited as a less expensive and more effective alternative to prison for dealing with many low-level repeat offenders.

But it is striking that the model is spreading at the federal level, where judges have increasingly pushed back against rules that restrict their ability to make their own determination of appropriate sentences.

In Federal District Court in Brooklyn on Thursday, Judge John Gleeson issued an opinion praising the new approach as a way to address swelling prison costs and disproportionate sentences for drug trafficking.

“Presentence programs like ours and those in other districts mean that a growing number of courts are no longer reflexively sentencing federal defendants who do not belong in prison to the costly prison terms recommended by the sentencing guidelines,” Judge Gleeson wrote.

The opinion came a year after Judge Gleeson, with the federal agency known as Pretrial Services, started a program that made achieving sobriety an incentive for drug-addicted defendants to avoid prison. The program had its first graduate this year: Emily Leitch, a Brooklyn woman with a long history of substance abuse who was arrested entering the country at Kennedy International Airport with over 13 kilograms of cocaine, about 30 pounds, in her luggage.

“I want to thank the federal government for giving me a chance,” Ms. Leitch said. “I always wanted to stand up as a sober person.”

The new approach is being prompted in part by the Obama administration, which previously supported legislation that scaled back sentences for crimes involving crack cocaine. The Justice Department has supported additional changes to the federal sentencing guidelines to permit the use of drug or mental health treatment as an alternative to incarceration for certain low-level offenders and changed its own policies to make those options more available.

“We recognize that imprisonment alone is not a complete strategy for reducing crime,” James M. Cole, the deputy attorney general, said in a statement. “Drug courts, re-entry courts and other related programs along with enforcement are all part of the solution.”

For nearly 30 years, the United States Sentencing Commission has established guidelines for sentencing, a role it was given in 1984 after studies found that federal judges were giving defendants widely varying sentences for similar crimes. The commission’s recommendations are approved by Congress, causing judges to bristle at what they consider interference with their judicial independence.

“When you impose a sentence that you believe is unjust, it is a very difficult thing to do,” Stefan R. Underhill, a federal judge in Connecticut, said in an interview. “It feels wrong.”

The development of drug courts may meet resistance from some Republicans in Congress.

“It is important that courts give deference to Congressional authority over sentencing,” Representative F. James Sensenbrenner Jr., Republican of Wisconsin, a member and former chairman of the Judiciary Committee, said in a statement. He said sentencing should not depend “on what judge happens to decide the case or what judicial circuit the defendant happens to be in.”

At the state level, pretrial drug courts have benefited from bipartisan support, with liberals supporting the programs as more focused on rehabilitation, and conservatives supporting them as a way to cut spending.

Under the model being used in state and federal courts, defendants must accept responsibility for their crimes and agree to receive drug treatment and other social services and attend regular meetings with judges who monitor their progress. In return for successful participation, they receive a reduced sentence or no jail time at all. If they fail, they are sent to prison.

The drug court option is not available to those facing more serious charges, like people accused of being high-level dealers or traffickers, or accused of a violent crime. (These programs differ from re-entry drug courts, which federal judges have long used to help offenders integrate into society after prison.)

In interviews, the federal judges who run the other programs pointed to a mix of reasons for their involvement.

Judge Ricardo S. Martinez ran a state drug court in Seattle before he was appointed to the federal bench. “People that have a serious addiction, you can put them in custody, but the minute you put them back in the community, they go back to the same thing and lo and behold you see them again,” Judge Martinez said in an interview.

Some of the most pointed criticism of the status quo has come from Judge Gleeson, a former federal prosecutor. The drug court he helped set up is open to defendants who committed a range of nonviolent crimes, like fraud and selling prescription pills, and whose addictions fueled their actions.

In a 35-page opinion he issued this week, he criticized the Justice Department for charging defendants with drug offenses that carry mandatory minimum sentences, urged the Sentencing Commission to reduce the guideline range for many drug offenses and called for more programs that divert defendants from prison time.

The opinion chronicled the case of three graduates of the drug court, including Ms. Leitch, 29. The daughter of two addicted parents, she began smoking marijuana daily and later snorting cocaine at a young age, stealing to pay for her drug habit.

After a visit with her children to Guyana, where her father lives, she was paid over $30,000 to transport drugs back to the United States. Customs agents at Kennedy found the cocaine and charged her with importing and possessing the drug, which carried a three-year sentence under federal guidelines.

Though she showed up high at a court hearing, causing her to be jailed for a time, Magistrate Judge Steven M. Gold offered her a slot a year ago in the district’s new drug court. She later took parenting courses, earned a general equivalency diploma and got a commercial bus driver’s license — with government subsidies for some of those efforts. She now drives a bus in Nassau County.

At a sentencing hearing for Ms. Leitch last month, a prosecutor vacated her guilty plea and agreed to dismiss the charges if she did not use drugs or get arrested for 18 months. After the hearing, Judge Gleeson offered some encouraging words for the defendant, and then a hug.

“I don’t know them as just the judge,” Ms. Leitch said later. “People see judges as the bad guy. They get deeper. They get to know who you are.”